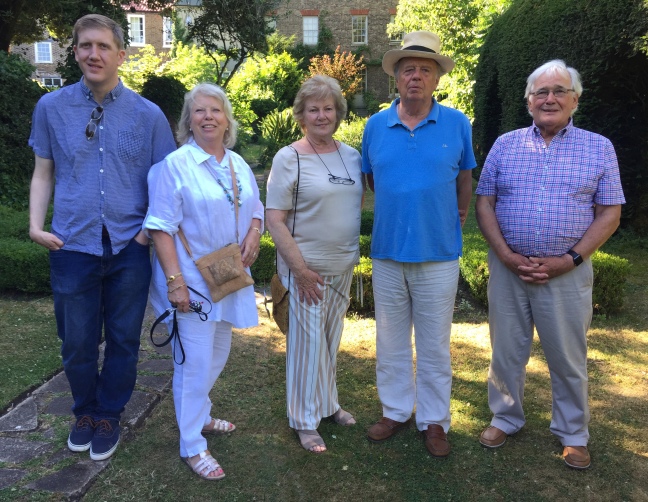 Pictured here in the Garden of Southside house, the rather ‘exclusive’ group of Brothers and wives who turned out on Saturday, June 30, to visit the not well known Southside House in Wimbledon Village. After an enjoyable lunch at the Cooked Billet, we ventured across the road to this hidden family home, which is now held in a family trust for a number of occupants and to allow conservation and access to the public. We had a very informative guided tour of this slightly oddball and at times rather ‘faded glory’ residence that was refashioned in the thirties of the last century by a family with aristocratic aspirations who had occupied the house for generations previously. The aspiratioinal quality of the house is underscored by its not quite entirely authentic architectural and interior features. However it is an interesting and entertaining place, well worth the visit.

The musical evenings that are held in the music room must be very atmospheric and perhaps safer than dining below the dining room chandaleer with about 100 lit candles, all of which would need to be perfectly vertical not to drip! The house contains a substantial number of apartments, whose occupants are expected to participate in the upkeep of the building.

Apparently described by connoisseurs as an unforgettable experience, Southside House provides an enchantingly eccentric backdrop to the lives and loves of generations of the Pennington Mellor Munthe families. Maintained in traditional style without intrusive refurbishment and crowded with family possessions of centuries, Southside offers a wealth of fascinating family stories. Southside has associations with Queen Natalie of Serbia and her son Alexander, and the family also have mementos from the Duke of Wharton, Lady Hamilton and others.

Southside was re-fashioned in the William and Mary style, and behind the long façade are the old rooms, still with much of the furniture which the Penningtons brought here, and a superb collection of art and historical objects reflecting centuries of ownership. John Pennington’s daughter Hilda married Axel Munthe, the charismatic Swedish doctor whose most famous book,The Story of St Michele, briefly outsold the bible and remains amongst the ten best sellers of the 20th century.