On Monday January 15, Balham Brothers celebrated their Circle’s 100th meeting at the Kairos Centre in Roehampton in the presence of Bishop Paul Hendricks. 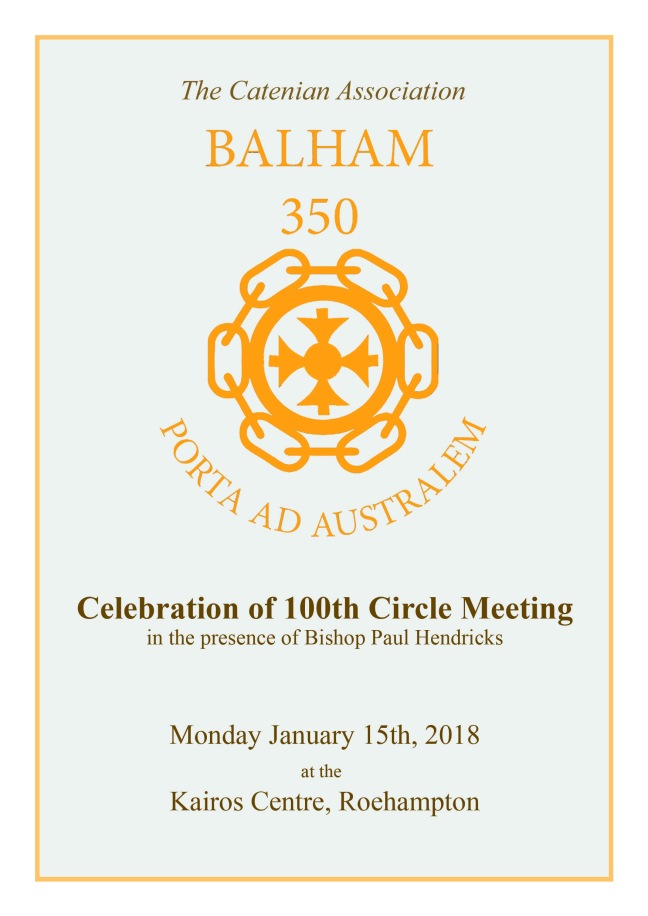 Balham Circle is one of the newer circles in Province 19 of the Association. Current president, Charles Marriott, had approached the Catenian Association in 2005 as he thought starting a social organisation would be a good way to meet more people in his parish. In the event he did, but the Catenian Association delivered a lot more than that, because he and the first contingent of new brothers ended up making new friends throughout Province 19. The Circle started off small and remains so but it has a very strong centre and continues to attract new brothers, many of them below the average Catenian age profile. So it was with a strong sense of passing history that the Circle set about planning its 100th meeting. The area bishop, the Most Reverend Paul Hendricks, agreed to attend and celebrate mass before the meeting and there was a strong turnout from brothers in other Province 19 circles including a number who had attended the inaugural Balham meeting in 2009.

The evening was judged a great success and typical Catenain bonhomie was in evidence, possibly helped by a good supply of wine at affordable prices! For this special occasion the Kairos Centre at Roehampton, an important retreat centre in Southern England, was the chosen venue. It has an excellent chef who provided delicious fare for the assembled brotherhood of about ninety.

We all look forward to the 200th meeting now, God willing!

We started in the chapel of the Maryfield Convent (now known as the Kairos Centre). Mass was at 6:30 PM and there were fears that many would not be able to get there in time, but in the event the chapel was full with the sisters sitting at the back.

We then had time for a quick drink before our meeting. Brother President kept the meeting running at a brisk pace and we managed to conclude within three quarters of an hour. Bishop Paul sat in on the meeting, which he found interesting.

We then swiftly decanted to the large dining room where the sisters and staff served an excellent three course meal. Brother Nader Sheta acted as MC and Brother Liam Lyons persuasively parted brothers of £420 for the President’s charity, Mary’s Meals. This will feed 30 children in one of the world’s poorest countries for a whole year.

There were toasts, and graces and an excellent speech from Brother President Charles. Brother Mark Potter, Provincial President, replied wittily and amusingly on behalf of the guests. Not long after, we all departed.

Most of us have attended many of these Catenian occasions but we think it can honestly be reported that this evening did stand out. It reflected the hospitable, informal and outgoing nature of our Balham Circle and we believe everyone involved can justifiably be pleased with the part that they played.

Our Bishop won the prize in the raffle that he had his eye on, which was a bottle of old Cognac, so we hope that he will have one or two agreeable evenings with his fellow clergy, reflecting on what excellent fellows we Catenians are!    CPM [some edits TGB]

Your humble photographer apologises for missing a table (put it down to age, food and a little wine), but hopes that every Brother attending appears in at least one picture! TGB