On Friday, May 1 we had the best turn-out yet for our “Join Me” visit to Southwark Cathedral, Borough Market and the George Inn.

We met for coffee in the Cathedral refectory and then we were treated to an excellent guided tour of the cathedral. Our guide, Sophie Wheeler, was very knowledgeable and seemed passionate about the cathedral, but she also sustained our interest throughout one and a half hours.

We learned about the cathedral’s origins, viewed Roman and early mediaeval remains and discovered that the cathedral nave is a Gothic reproduction. Hardly “Gothic revival”, it is actually a scholarly re-creation of what the Early English nave might have been like.

More extensive parts of the medieval cathedral were to be found in the the retro-choir. There were many anecdotes about people associated with the cathedral and in particular the Bard, William Shakespeare, and others involved with the nearby Globe Theatre. We viewed a chapel, dedicated to John Harvard, resident of Southwark who towards the end of his life emigrated to America and left a legacy which funded the start of Harvard University. Short prayers were said in the Harvard Chapel and with our guide we waited in respectful silence until the prayers were over.

We also viewed a plaque dedicated to Sam Wanamaker who started the project to rebuild the Globe Theatre and a floor memorial dedicated to those who drowned in the Marchioness sinking in 1989.

Last but not least we met at the Cathedral cat, ironically called Dawkins.

After a little time to wander through Borough Market with its wonderful and tempting sights and scents of food of all kinds, we arrived hungrily at the George Inn. We had a pleasant table in the upper bar and rounded off our visit with a pint, lots of chat and some enjoyable pub grub! 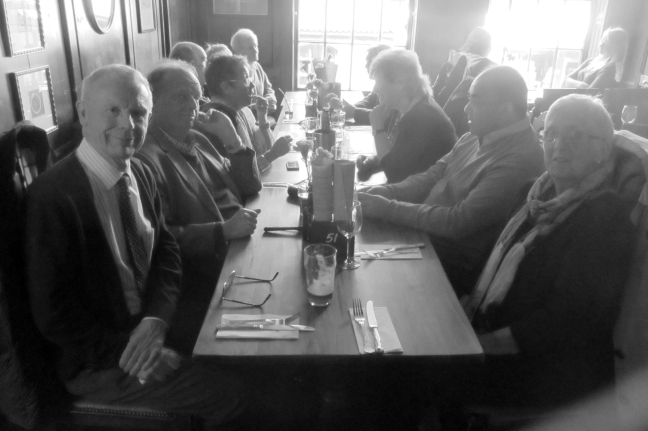